The 2020 Grand Marshal was Eugene Schneur! The 2020 Virtual Celebrate Israel Parade had a theme of Todah (thank you in Hebrew). We wanted to utilize this opportunity to express our deep gratitude to all the healthcare, first responder and other frontline workers in New York, across the United States, in Israel, and around the world.  In addition, as we celebrate the Parade’s 56th anniversary we also wanted to show our appreciation to our sponsors and participants who, over the decades, have truly made the Parades on Fifth Avenue as great as they have been.

On the day of the Parade, in honor of the essential workers on the front lines who are protecting our loved ones and keeping our communities moving forward, 100% of your gift went toward UJA’s Covid-19 relief efforts to continue to meet growing needs locally and in Israel.

Help us support the essential workers — and the broader community — who are counting on us right now.
You can download a copy of the 2020 Virtual Celebrate Israel Parade Flyer here!

Special messages from our elected officials:

Ambassador Danny Danon, Permanent Representative of Israel to the UN

Where in order to be a realist, you must believe in miracles.
Where ancient villages stand beside ultra-modern cities.
Where a 2,000 year old language was resurrected for modern speech.
Where exiles from the four corners of the world have come home.
Where skill and chutzpah together make the impossible come true.
Where barren deserts are transformed into flourishing fields.
Where diverse cultures produce a fusion of global cuisine.
Where pioneers build new frontiers in science and technology.
Where water can be produced from thin air.
Where those with incurable diseases are cured.
Where if you will it, it is no dream.
Only in Israel! – Rak B’Yisrael! 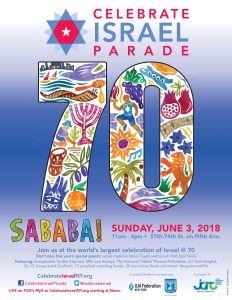 When Israelis say something is Sababa, they mean it’s awesome, fantastic, super! In just 70 years, this tiny, arid country with few natural resources, has grown, developed, and prospered beyond belief and expectation. With incredible landscapes and seascapes, gigantic skyscrapers and beautiful cities, amazing technological, medical and agricultural advancements, Israelis have been at the forefront of it all, and the whole world has benefited. Israel: You are Sababa!

2017 –  Celebrate Israel All Together 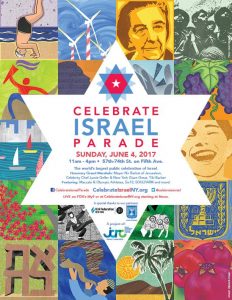 Together, we are stronger. We encourage and support each other; we celebrate our differences and find common ground; we increase our understanding of ourselves, each other and the world. Our love for Israel unites us throughout history, now and forever! All together, we celebrate Israel! 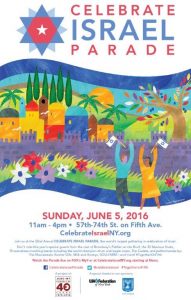 Israel, a small country about the size of NJ, is bursting with energy, has an amazing variety of climates and geographical contrasts – mountains, valleys, deserts – and is filled with an incredible variety of flora and fauna. Everywhere you go, there are ultra-modern cities with towering skyscrapers alongside ancient, Biblical cities.   With more than 8.4 million people from over 30 regions and countries in the world, Israel is a model of diversity.  Israelis are warm and friendly, happy to have coffee with you and then invite you home for dinner!  Celebrated as the Start-Up Nation, Israelis think out of the box to solve problems and are at the cutting edge of science, technology and invention.  Israel speaks to our history and to our hearts.  In Israel, there is so much to see, so much to do, so much to feel and embrace. 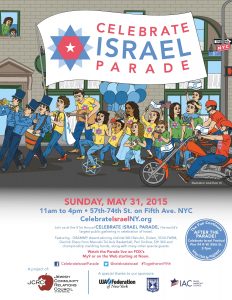 The founders of Israel had a dream. They imagined a vibrant, independent and Jewish state that would not only be a haven for Jews from all over the world, but also one that would incorporate the best characteristics of its citizens: brains and brawn, creativity, determination, fairness and imagination – a state whose greatest natural resource is its people who could imagine that future – one that would benefit the whole world! Today’s Israel is a result of that dream. We invite you to use your imagination and creativity to highlight some of the things that Israel imagined and continues to imagine – some that have come to fruition and some still to be achieved. 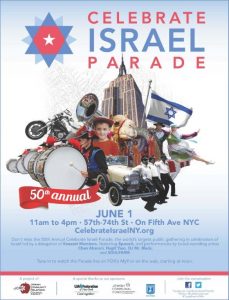 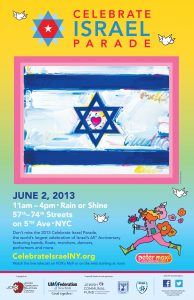 Participants will bring to Fifth Avenue illustrations, paintings, collages, tapestries to show the diversity of Israel and its people, the land/sea/city-scapes, accomplishments, etc. 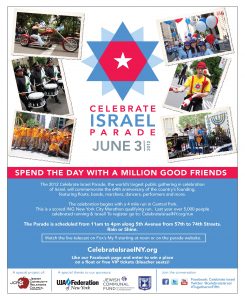 Participants learned about Israel as it relates to: flowers, blossoming, being fruitful, growing, going out on a limb, branching out into (hi-tech), stemming the tide of, trees, plants, agricultural models, finding our roots, seeds and they brought a Garden of Delight to Fifth Avenue!